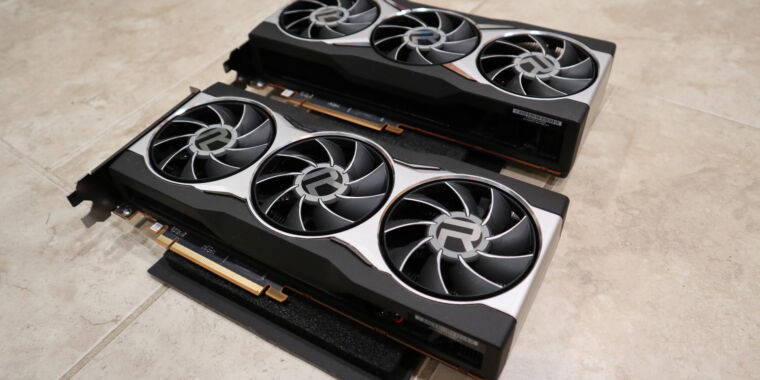 As cryptocurrency tumbles, prices for new and used GPUs continue to fall

AMD's Radeon RX 6000 series GPUs, in particular, are easy to find below MSRP.

As Tom's Hardware reports, most mid-range Nvidia GeForce RTX 3000-series cards are still selling at or slightly over their manufacturer-suggested retail prices—the 3050, 3060, and 3070 series are all still in high demand. But top-end 3080 Ti, 3090, and 3090 Ti GPUs are all selling below their (admittedly astronomical) MSRPs right now, as are almost all of AMD's Radeon RX 6000 series cards.

Used prices have fallen even more quickly. Between June 1 and June 15, eBay prices for used GPUs fell an average of 10 percent as at least some cryptocurrency miners sought to cut their losses and sell their hardware. This is happening even as mining software is beginning to find ways around Nvidia's hash-rate limiting LHR protections—falling cryptocurrency prices and rising energy costs are still making the economics of mining tricky.
Click to expand...

And at long last the insane price hike on cards seem to be ending and reversing to a degree.

Get rekt cryptobros and scalper vultures

it just keeps tumbling down

"Fear not! What is happening is actually an opportunity as opportunists and bitcoin tourists are forced out and only the purists remain!~ We will rise again!"

There's a reason why people make "This too is good for Bitcoin" jokes; at its core it's basically a cult. Those "Bitcoin purists" are irrational True Believers who think that Bitcoin will prosper because anything else is unthinkable.

It's a scam too of course, but cults are often also scams.

Having been recently watching Bioshock LP's, it's so eeiry to see people say shit straight from Andrew Ryan's mouth as things have begun to crash down around them.

Avernus said:
There's a reason why people make "This too is good for Bitcoin" jokes; at its core it's basically a cult. Those "Bitcoin purists" are irrational True Believers who think that Bitcoin will prosper because anything else is unthinkable.

Hahaha what the fuuuuck


Avernus said:
There's a reason why people make "This too is good for Bitcoin" jokes; at its core it's basically a cult. Those "Bitcoin purists" are irrational True Believers who think that Bitcoin will prosper because anything else is unthinkable.

True. Up until the original crop of believers who know that it's a scam die, whereupon it becomes a religion.

Anyway, it's probably a good thing that I never got around to mining crypto. While I would like to see the industry crash and never rise again, I doubt we're that lucky.

Hum the Bitcoin stopped around 20k...

Oh there is also this

Plain speaking they are throwing money to the moneyfire in hopes of putting it out.

And likely manipulating their data i.e. lying like mad.

r/CryptoCurrency - Solend, the largest lending market on Solana is about to have a crippling liquidation of $170m SOL that could crash the network. To prevent this, the decentralized protocol is proposing to seize the user's funds via governance

In related news one of the *whales* tried to cash out and leave the rest of the suckers holding the bag... But apparently in cryptoland they can actually seize your holdings via *voting*

So much for the being the last refuge against the cruel and dictatorial government rules that can arbitarily strip of your wealth right?

Hum looks like some of the bigest BT holders or Whales are coming out and beg govs to regulate cryptoland.

Author
Such is the wonder of capitalism. In a market where there is no central banks to regulate currency, the Invisible Hand pushes private entities to take up the role make that money printer go brrrr.

There is something cathartic in watching a dumpsterfire in which most are scammers trying to outscam each other.

Never thought I would actually see an economic Let Em Fight! moment in which the ammount of suffering by the mostly innocent bystanders would not be more than the pain suffered by the *Whales* and *Bulls* and *Bears* and all dem new terms I keep learning from cryptoponzi land.

The whole thing reminds me of something that the creator of “Dilbert” said, years ago before he went mask off rightwing.

“Beware the advice of successful people. They do not seek company”
Historians have a word for Germans who joined the Nazi party, not because they hated Jews, but because out of a hope for restored patriotism, or a sense of economic anxiety, or a hope to preserve their religious values, or dislike of their opponents, or raw political opportunism, or convenience, or ignorance, or greed. That word is “Nazi”.

"In the end crypto is an ideal, a religion, a state of mind, pure and untainted by mundane concepts like value, tradability and crass demands for a stable exchange for filthy fiat currency."

Crypto bros...we got too cocky.

Hackers looted about $100 million from a so-called cryptocurrency bridge, again exposing a key vulnerability in the digital-asset ecosystem.

Blockchain Harmony said in a tweet that the hack of its Horizon bridge, which lets people swap coins between different blockchains, took place Thursday morning. It has "begun working with national authorities and forensic specialists to identify the culprit and retrieve the stolen funds."

The attack on Horizon, which offers cross-chain transfers between Ethereum and Binance's Smart Chain, marks the third major bridge hack this year. In February, hackers stole more than $300 million from the Wormhole bridge, followed by a $620 million theft from the Ronin bridge a month later.

Even before to the Horizon hack, more than $1 billion had been stolen from bridges, researcher Chainalysis has estimated.

The amount of money locked on bridges connected to the Ethereum blockchain declined 60% in the last 30 days to less than $12 billion, per tracker Dune, triggered by a wider crypto market slump and liquidity concerns surrounding several large crypto players including Celsius Network, Babel Finance, Three Arrows Capital and Voyager Digital.
Click to expand...

Bridges are good for Bitcoin as well.

San Francisco-based plan provider ForUsAll Inc. will launch an Alt 401(k) product "later this summer" that lets employee investors transfer up to 5% of their nest eggs directly into more than 50 different cryptocurrencies.

The Alt 401(k) will be available through the company's bundled 401(k) option or via standalone brokerage accounts for existing plans. Company officials said they have built in investor protections, such as investment caps, institutional-grade crypto limits, a quiz to ensure investors know enough about trading and proactive monitoring, and alerts for participants and sponsors.

A Labor Department spokesperson didn't immediately respond to a request for comment.

"We know that there are employers who see that access to cryptocurrency through a self-directed window potentially has a role to play as part of their overall plan design,"Schulte said.
Click to expand...

The cryptobros after draining the easy suckers dry and not able to con the funds just yet are going for the Holy Grail of all self respecting con artists, embezzlers and confidencce tricksters. 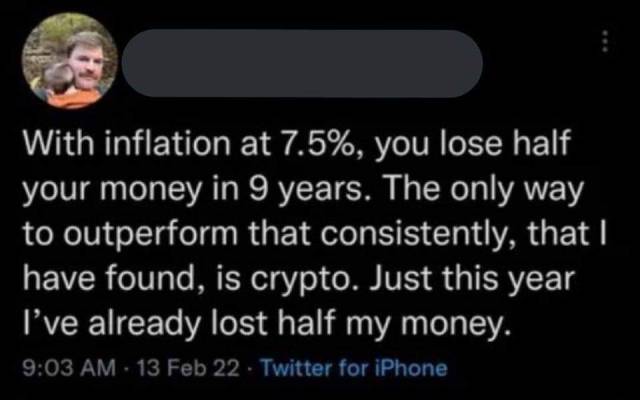 The British Army's Twitter and Youtube accounts were hacked this weekend, apparently as part of a scheme to promote certain collections of NFTs (thanks, BBC(opens in new tab)).

The twitter feed as it was can be viewed here(opens in new tab): essentially the hackers replaced all the imagery around the account, and began retweeting NFT-related schemes to the British Army's roughly 365,000 followers. They also renamed the account 'pssssd' and, later, 'Bapesclan'.
Click to expand...