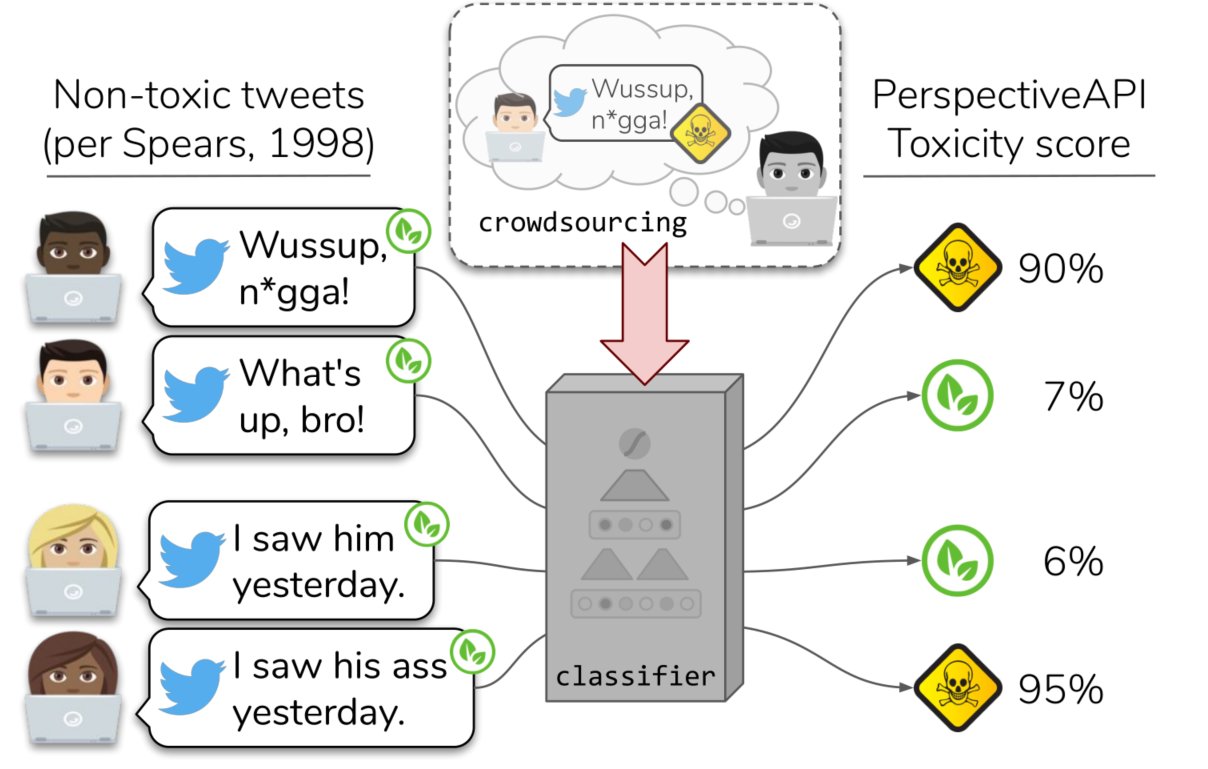 Understanding what makes something offensive or hurtful is difficult enough that many people can't figure it out, let alone AI systems. And people of color are frequently left out of AI training sets. So it's little surprise that Alphabet/Google-spawned Jigsaw manages to trip over both of these...

Understanding what makes something offensive or hurtful is difficult enough that many people can’t figure it out, let alone AI systems. And people of color are frequently left out of AI training sets. So it’s little surprise that Alphabet/Google -spawned Jigsaw manages to trip over both of these issues at once, flagging slang used by black Americans as toxic.

To be clear, the study was not specifically about evaluating the company’s hate speech detection algorithm, which has faced issues before. Instead it is cited as a contemporary attempt to computationally dissect speech and assign a “toxicity score” — and that it appears to fail in a way indicative of bias against black American speech patterns.
Click to expand...

OK, so it is an Alphabet subsidiary's algorithms, but it's almost exactly the same as the thread title.

This inability to understand languages in context will certainly delay the inevitable robot apocalypse. Or perhaps start it. Who knows? The point is that languages are hard, AI is even more autistic than people on the internet, and robots are dumb so it is fine that we smack them with hockey sticks. Or something like that.

Also, black lingo is hella rude but I guess it is racist to say that. Still, as Sorry to Bother You clearly showed us, a white voice will make black people more acceptable to everyone until the corporate giants create equisapiens. Wait... Google is a corporate giant. It all begins to make perfect sense, horse people versus the robot uprising means that the capitalists benefit from the power struggles that they manufactured!

I think I drifted off point somewhere.
I will survive you all.

Moderator
Please change the title of your thread to something else. It's super flame bait currently.

EDIT: Thank you and carry on.
Last edited: Aug 15, 2019
This is my mod voice. Heed my words or feel the wrath of mod bunnies

Author
Honestly, this is beyond hilarious. That sounds like the epithome of thin skin. And it's a machine!

Lord Kragan said:
Honestly, this is beyond hilarious. That sounds like the epithome of thin skin. And it's a machine!
Click to expand...

Society is moving more and more to automation, and this is the sort of thing that would lead security AI to, for example, task a camera system to track a minority because the statistics show that one group to be more likely to commit a crime. Essentially, it might take a subconscious bias or outright malice from human beings and make an integral part of the system.

Or you could have yet another example of something like the YouTube algorithm on a wider scale. Taking innocent speech as offensive and then serving up conspiracy theories or radical political theories base off of a false reading. Which might just have a lot of people wondering "how did I get here from X", but it only takes a few items of catered content to create real harm.

Sure, you can maintain human monitoring to some extent, but the knowledge that for the foreseeable future machine learning will be just as bad or worse than humans because they cannot handle context is worrying. Because nobody is looking to go away from the wonder machines, but is trying to rebuild society around them.
I will survive you all.

Author
So...does this mean that during the inevitable robot uprising, humanity will assign black people to act as codetalkers?

(Also, I really want to know what the original title of this thread was.)
Trust me, I know what I'm doing.

Inspector Hammer said:
So...does this mean that during the inevitable robot uprising, humanity will assign black people to act as codetalkers?
Click to expand...

"Unit 771, report. Do the humans plan to attack?"
"It appears not, Unit 212. Their communications are very disrespectful and filled with slurs. They will almost certainly be attacking each other instead of concentrating their efforts on u-*boom!*"
I will survive you all.

Lerticus said:
This inability to understand languages in context will certainly delay the inevitable robot apocalypse
Click to expand...

Kinetic said:
The problem is easily solved by giving robots AK-74. You point it at the other guy and he immediately develops the ability to communicate in language you can understand. Usually Russian
Click to expand...

We have already designed an effective counter: the UN will officially rename the Korean DMZ "B". Usually, the next step after speaking Russian when given an AK-74 is to yell "Rush B", therefore the machine uprising will end in the biggest minefield ever set up and our Dear Leader will get his fifth Nobel Prize for Peace.
B

Rufus Shinra said:
We have already designed an effective counter: the UN will officially rename the Korean DMZ "B". Usually, the next step after speaking Russian when given an AK-74 is to yell "Rush B", therefore the machine uprising will end in the biggest minefield ever set up and our Dear Leader will get his fifth Nobel Prize for Peace.
Click to expand...

And they all squat their way to the Korean DMZ

Author
See: has nothng to do with AI and everything the fuck to do with Google
"I want to shove the faces of American politicians into the pile of dog shit that is Donald Trump and say look what you made." - Alexis Mincolla, 3 Teeth
The Speed of Light
(or you can email/PM me for a free digital copy)​

IndyFront said:
See: has nothng to do with AI and everything the fuck to do with Google
Click to expand...

Agreed and quite frankly I think people shouldn't be laughing; they should be worried, imho.

Author
I understand this is an old thread but I like to make a contribution.


Richard Prior, by many, considered the greatest comedy genius of the XX century(he isn't) said this in a special.

"I been to Africa and I saw black faces everywhere.
But I didn't see any niggers."

Every slang is offensive.
It is made so by design. Each uses words that are derogatory as a term of endearment. It works in closed communities but using it outside of them makes you sound like a rube.

So the findings posted in this thread, are something that is known for centuries if not millennia.

I think we should all remember that the AI's do not actually understand what any of the words actually mean.
They have no outside reference for them - just matching them with other words.

Imagine walking along a beach, and feeling the cold of the wet sand underneath your feet, and smelling the salt of the breaking waves.
An AI might be able to link to definitions of those words, but it has no experience of them.

Lol my FB feed gave me an article just now about *The first Rapper AI being shut down cause it used racist lyrics.*

Gee man who could of thought a sophisticated chat bot would pick up all the bitches, dope and N-words used in rap, especially black/getto rap and produce the exact same rap humans produce.

Except it would be deemed racist since it is a bot and not that wierd ass exception of the people described in a slur being the only ones allowed to use it.
S