On a Knife's Edge, a Post Weltkrieg 2 Kaiserreich Japan Game

Moderator
[x] Partial Plan The Way Forward
This is my mod voice. Heed my words or feel the wrath of mod bunnies
C

-[x] Comprehensive plan to deal with the emergence of recreational drugs.

Suggestion: Marijuana can only be sold at prefecture or national licensed dispensaries in Japan. Possession and use of marijuana is allowed by distribution is not. Laws and fines on public drunkenness and disorder shall be the same as Beer/Alcohol. LSD/Opium can only be issued by Psychiatrists and licenses medical professionals for medical reason. The Underworld elements are to be warned about open distribution of drugs.

-[x] Dealing with the veterans of past and future conflicts.
The finest weapons and machinery that is made with the finest materials and craftsmanship needs maintenance and repair. We must encourage military veterans and their families that if they need help that confidential and free help is available from the Army/Navy. Psychiatrists with military backgrounds will be provided and all medical records will be kept confidential.

[x] Dealing with the European refugees
This is agreeable.

[X] Electrify all of Japan's Railways

[X] Invite a delegation of American Union railway experts and planners on a 'limited' review of the new High Speed Rail. This is not an official state visit. Just a reaching out about mutual interests.

Moderator
@Malsya, what do you think? You have any plans on your own?

Also, I can't do something unless you hash out a compromise on the details, some of the details on @christopher_sni's plan differs from @Eliar's plan.
THIS IS MY MOD COLOR. DO NOT BE ON THE RECEIVING END OF THIS TEXT

Jakarta said:
@Malsya, what do you think? You have any plans on your own?

Also, I can't do something unless you hash out a compromise on the details, some of the details on @christopher_sni's plan differs from @Eliar's plan.
Click to expand...

I already cast my vote for sni's plan.

It aligns pretty well with mine so.

Jakarta said:
@Malsya, what do you think? You have any plans on your own?

Also, I can't do something unless you hash out a compromise on the details, some of the details on @christopher_sni's plan differs from @Eliar's plan.
Click to expand...

Sorry, I am little bit sick so I guessed I will followed the others
1963 Results, Turn 15

Perhaps the attempt with the most surprising end result. The drug issue is widely deemed to be solved by all concerned citizens and government officials once the feelers to the Criminal Syndicates are released and limited supplies of certain drugs deemed 'non-harmful' were rolled out by the various prefectural governments.

All of this straight from the committee recommendation for drug investigation report too. A 5 star example on how good committee management and prompt legislating from Tokyo can have a generally positive, and profitable, end result.

Japan is becoming known for it's relatively insular society, and even though it's current position does not allow for that insularity to last long. There are still elements of Japanese society still resistant to change. Most notable among them right now are military veterans, despite the many encouragements, the many efforts by Tokyo to create a Veterans Healthcare system, and the multitude of staff hired and staffed all across Japan. appointments are still few and far in between, and there are visible concerns among the Politicians that Japanese war Veterans just might not be all that interested in voicing out their problems at all.

Hopefully this will resolve itself in the coming years, or else this will bite everyone in the ass.

And of course, the insular/ conservative forces in Japan are out in force during the debate for Japan's first ever comprehensive immigration bill. Their various bullshit concerns among the people 'not being fully Japanese' and 'unable to integrate towards Japanese society' despite evidence to the contrary. A famous photo was taken of a Rikken Minseito Diet Member from Sendai eating what is called a 'Karēsōsēji', a dish pioneered by the German Immigrant population in Taiwan, integrating German sausages, Taiwanese rice, and Japanese curry. It became famous due to the Politician's visible dislike for immigrants. And widely circulated among left-wing circles as a prime example of conservative hypocrisy.

Of course, with such a heated topic, the vote was going to be close, but nobody expected how close the vote got. Only a 10 vote margin in favour of the law in the Diet, and an even smaller margin of 5 votes in the House of Peers. Nonetheless, the law passes and hundreds of thousands of European Refugees immediately gained citizenship status, coupled with the millions gaining temporary residency as well. This will have an effect on the upcoming election.

Cultural Exception Clause met with furor among the Japanese public, despite being ratified by the Diet (You rolled a 7)

The Cultural Exception Law has only one group that visibly supported it: Academia. More than happy to analyze the current and latest forms of creative expression coming from the Socialist West. The rest of the public was dumbfounded and even resistive of the Cultural Exception Law, seeing it as some form of aberration entering the country, there are visible protests by mainly conservative Japanese peoples towards the law, but more unusually, protests to the law was not limited to conservatives only, practically everyone, from factory workers, salarymen, some University students, and farmers voiced their displeasure towards such a law.

In another note, a certain British band called the Beatles has been a hit throughout the Japanese airwaves. Two songs, 'I saw her standing there' and 'Love me do', were the songs played in Japanese Discotheques and Radios.

Chaos as the MoD Forms (You rolled a 10)

Well, in hindsight this was always going to happen. Integrating three disparate Military Branches into one Ministry was always going to be chaotic, and it really shows, the separate formatting of paperwork, the fighting over whose office space should be staffed by who, and of course, inter-service rivalry made the creation of the MoD a chaotic and ad-hoc process. They are getting along, and promised the Diet that this is all in Japan's best interest, but it really doesn't look like it from a surface level observation of the situation.

Pacific Islands University Act off to a start riddled with land disputes, supply chain problems, and even pushback by the local populace (You rolled a 4)

An egging for Tetsu Katayama if there was one. The proposed University complexes are all located in disparate sites separated by hundreds, even thousands of kilometers of oceans, and of course the locals weren't super happy when the Japanese government comes in and starts buying massive amounts of land for University construction. There are land disputes throughout the early process, townhall meetings descending into chaos, and contractors having to wait for months on end for the cargo ship to finally bring in the required building materials for construction.

All in all, an epic mess, one that Diet Member Katayama has taken full responsibility for and will work until the problem has been rectified.

A similar situation, almost parallel in fact. Electrification of the rest of Japan's railways as been met with public opposition, the populace not really wanting their neighborhoods to turn into ad-hoc construction sites for potentially 2-3 years. The only difference with the Pacific Universities being that Project Management of the Electrification process are actually competent, and most concerns by the populace were snuffed out with promises and local agreements for work-times and hiring.

CEWS finally finished, and meetings with American Railway executives are going relatively smoothly (You rolled a 13)

The only other area where progress has been good. The Coastal Early Warning System has finally been finished, with testing of the system revealing that it is working up to specification. With the CEWS finished and very, very overbudget. The meetings with American Railway experts and executives can begin, and despite the limited nature of the cooperation, the enthusiasm expressed by the Americans blew our expectations, and they are incredibly willing to jot out whatever detail on our Shinkansen project, talks about a 'Great Lakes Corridor' and a 'Northeast Corridor' were abound in their mouths. At the very least, we know which areas the Americans want to prioritize their High Speed Rail Construction at.
THIS IS MY MOD COLOR. DO NOT BE ON THE RECEIVING END OF THIS TEXT

Lewl a critical success in the issue I expected the most resistance and shit rolls elsewhere!?

Moderator
This is a map of the 1963 world, per @christopher_sni's request. 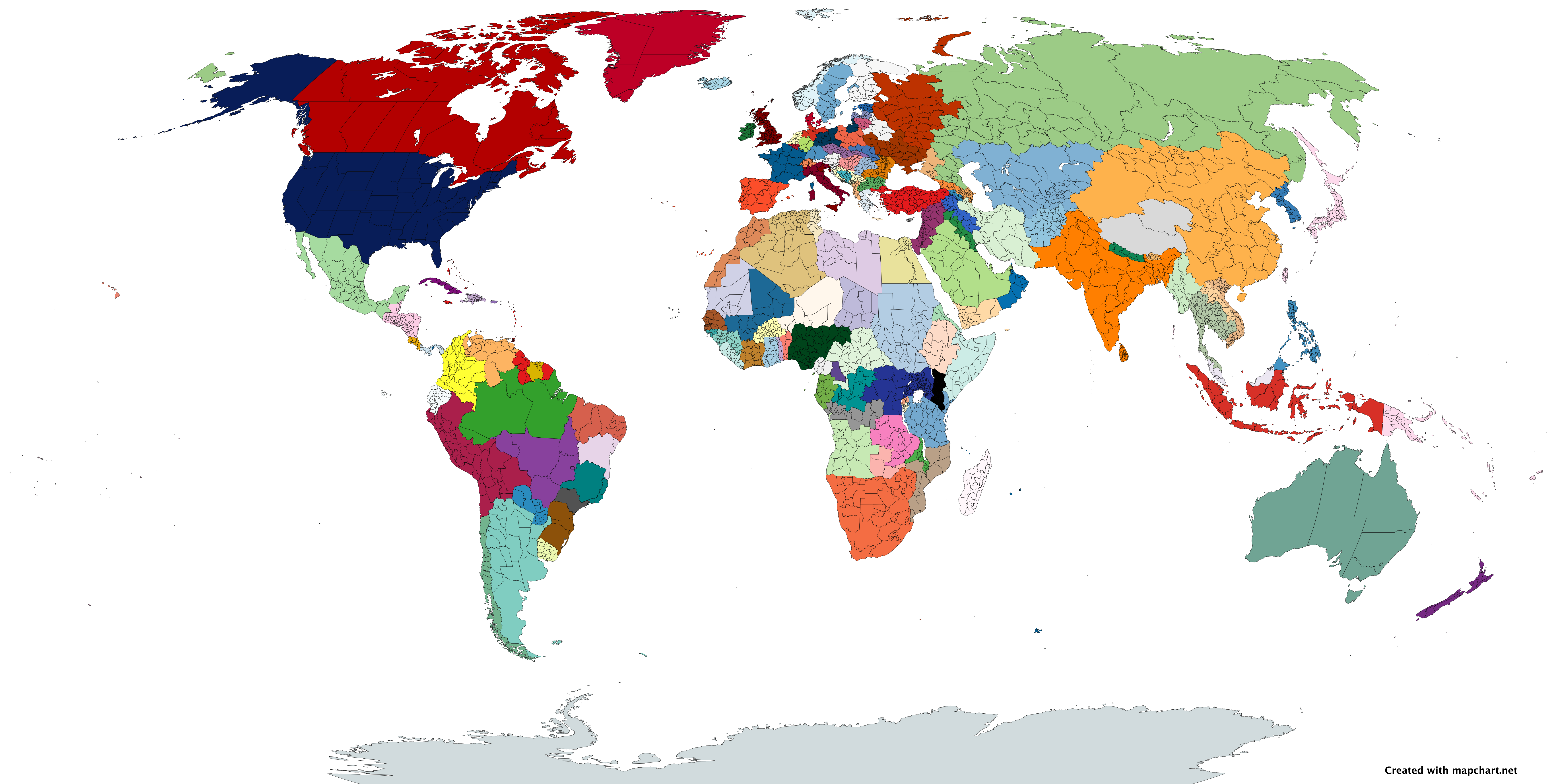 Although some parts are inaccurate due to my inability to find Kaiserreich's HOI4 map and paint it. On the general, it depicts the borders accurately to the best of my ability.
THIS IS MY MOD COLOR. DO NOT BE ON THE RECEIVING END OF THIS TEXT