Moderator
Discuss all things Star Wars here.
This is my mod voice. Heed my words or feel the wrath of mod bunnies

Author
They have really been sucking lately.
"Is it just me, or is it getting crazier out there?"
The Speed of Light
(or you can email/PM me for a free digital copy)​

IndyFront said:
They have really been sucking lately.
Click to expand...

Here's a little tadbit of information for you: the customer doesn't know what they want. While a good portion of the blame goes to Disney for ignoring various lessons over the last few decades, most of it is because, let's face it, people don't know what they really want.
Lightning Count laying down what is and isn't canon in Babylon 5, read it, watch it, and understand that, yes, practically all the EU is part of B5. Lighting Count also describing how the Interceptors work. 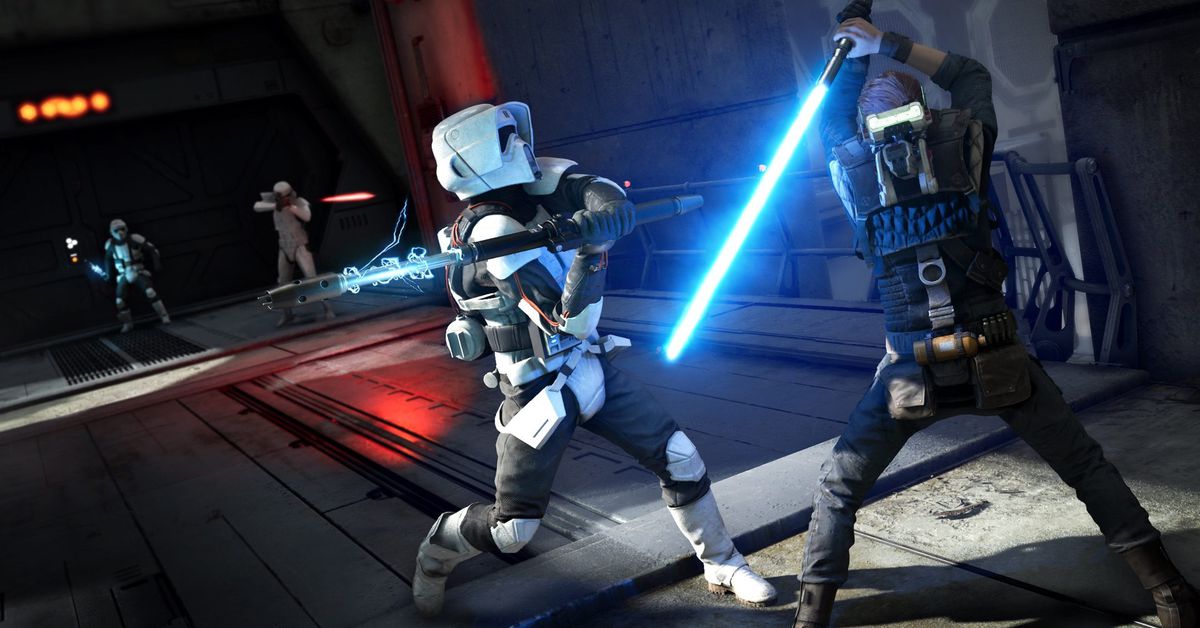 So Fallen Order has done better than EA had expected as 8 million copies were bought by the end of December when they had expected to sell 6 to 8 million copies by the end of the fiscal year which is March 31st. One would hope EA doesn't squander the goodwill Fallen Order has generated in relation to EA Star Wars but being that is EA I wouldn't be surprised by them messing up somehow with their next game.
This is my mod voice. Heed my words or feel the wrath of mod bunnies

How did that come about?

Was there no gambling child traps in that one>

Moderator
EA boasted about this game not having micro transactions in press releases. As for it's success I'd say because it's mechanics from other games turn it into a solid Star Wars game and lets you be a Jedi. Personally wasn't a fan of the fact that the story has pretty much zero impact on Star Wars future in-universe though that's a given with Disney refusing to have more than one timeline. It is a big win on the other hand for EA and will have an impact on the future of EA Star Wars as the recent industry mantra has been "Single player games are dead" and well this stands as an example among a few others that this is not true.
Last edited: Feb 2, 2020
This is my mod voice. Heed my words or feel the wrath of mod bunnies

Author
The thing is, in terms of consistent sales, singleplayer games have lagged behind immensely until recently.
Lightning Count laying down what is and isn't canon in Babylon 5, read it, watch it, and understand that, yes, practically all the EU is part of B5. Lighting Count also describing how the Interceptors work.

Otherwise, not the greatest news. Hell, the latest was taking the originally planned-for Obi-Wan movie that transitioned to a 6 episode Disney+ series now likely becoming a 4 episode series. So essentially the movie. Oh, but they still don't have a real script. That does not bode well at all.

Aaron Fox said:
The thing is, in terms of consistent sales, singleplayer games have lagged behind immensely until recently.
Click to expand...

The singleplayer games tend to be the better made games though. Which means that you get consistent sales with each game as you gain customer loyalty. The "Who cares about if the game is finished? Make some patches and DLC, we need to release this quarter." method is fucking over the industry, and now any studio is only as good as their last release.

People loved KOTOR. Just by mentioning this there is a high probability that someone will fire up the old games. Fans would have paid for a dozen new games with an aging graphics engine so long as they could follow and take place in stories in that sandbox. Then the MMO came out where you could... wander around in the setting and... stuff, I guess. Sales dropped off a cliff.
I will survive you all.

Moderator
So watched The Mandalorian. Really good show and a good way to get rid of the bad taste left by Rise of Skywalker. Though some of the dialogue could've used a rewrite and wasn't a fan of some elements of the story but still a terrific show and I'm excited for the next season.
This is my mod voice. Heed my words or feel the wrath of mod bunnies

New stories will explore the Star Wars galaxy set 200 years before the events of The Phantom Menace.

So Disney is kicking off a new multimedia media campaign for Star Wars in August set 200 years before Episode 1 where the Galactic Republic and the Jedi Order are at their zenith. Basically it will be like the Clone Wars multimedia project launched by Lucasfilm that last from 2003 through 2005 except more kid friendlier even though there will be entertainment aimed at adults and teens being that this is Disney and no video games for the moment. Personally not really interested though announce a project like this for the Old Republic era of the Disney canon and I'll board that hype train.
This is my mod voice. Heed my words or feel the wrath of mod bunnies
You must log in or register to reply here.
Share:
Facebook Twitter Reddit Pinterest Tumblr WhatsApp Email Link
Menu
Log in
Register
Top Bottom